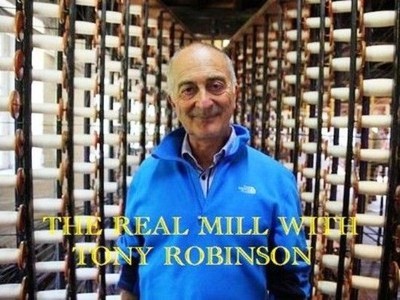 A two-part documentary following Tony as he visits the Quarry Bank Mill in Cheshire – the inspiration behind Channel 4 drama The Mill – to learn about the experiences of Britain’s factory workers who drove the Industrial Revolution in the 18th and 19th centuries. As the looms roar and the air fills with dust (the mill, now run by the National Trust, is fully operational), Robinson is set to work, crawling beneath the machinery to pick up bits of fluffy cotton. This was a job done by children, often as young as seven, who worked 12-hour days.

1) Beginning
Tony and social historian Emma Griffin uncover the personalities behind some of the workers who gave their lives to the progression of the mill – including a host of orphaned children who were legally bound to offer their services. They also find out about the growth of `factory communities’ that featured houses, churches, shops and schools.

2) Conculsion
Tony and Emma continue to explore the true story of the Industrial Revolution’s factory workers, and joins social historian Professor Emma Griffin to discover how, as industrialisation transformed Britain, workers across the country joined together to fight for their rights. Plus, they examine how steam engines were powering factories as never before by the 1810s, and demands for change evolved into the Chartist movement in the 1840s.